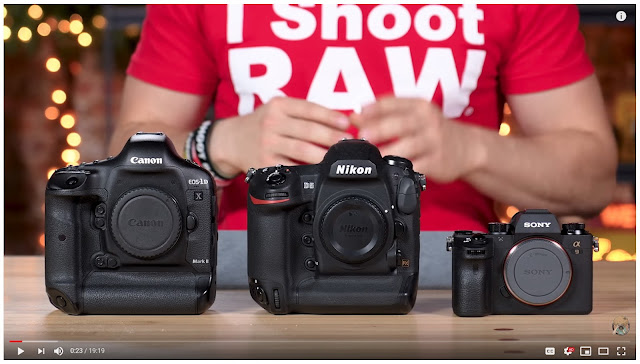 After taking the time to ponder on the issue for close to 1 full year, we've taken all aspects in consideration, and finally made the move to mirrorless camera bodies, with the new Sony a9 & a7rIV.

After being asked "why" by many, I thought we'd clarify our decision, by listing some of the more important factors that prompted the switch.

1. Weight loss
I'm no spring chicken anymore, and lugging around 3 camera bodies, lenses and accessories became tiresome on day-long mandates.  Any reduction in weight (and in this case, lots of it), was more than welcome. (see photo above)
Sony 1 - Canon/Nikon 0

2. Resolution
The a9 packs a full frame sensor with 24mp resolution, when both the 1Dx and D5 only offer 20.2mp & 21mp respectively.  Slight advantage, but still, when it comes to full frame cameras, the more the resolution, the more you can crop with out apparent loss of image quality. The Sony a7rIV is the worlds' first 35mm full-frame 61.0 megapixel sensor!
Sony 2 - Canon/Nikon 0

4. Low-Light (ISO) image quality
Based on impartial comparisons seen on the web, same-setting images yielded much "cleaner" results in low light and high ISO conditions on the a9.  Based on the type of mandates we cover, this was a major decision factor, and will no doubt prove to be a game-changer for us.
Sony 4 - Canon/Nikon 0

5. Onboard Wifi
Unlike both Canon & Nikon, who only offer expensive ($900) modules that need to be screwed on the outside of their units to have wireless transmission, the a9 comes with onboard wifi capability.
Sony 5 - Canon / Nikon 0

6. Eye detection and image tracking
Sony came out with the eye-detection feature, coupled with image tracking, making it virtually impossible to obtain an out-of-focus image.  Both the subject and the shooter can be in motion, and as long as you keep the subject in the frame, the shot is yours to take!
Sony 6 - Canon/Nikon 0

7. Silent
In cases where you need to be silent, whether it be shooting on the green during a PGA golf tournament, the Montreal Symphonic Orchestra, or simply being amongst the crowd during a concert, we need to be "invisible" and non-disruptive, and the a9 will provide just that, otherwise impossible without a cumbersome dedicated silent boxed enclosure.
Sony 7 - Canon/Nikon 0

The list goes on, but we'll stop here and let you be the judge for yourself upon viewing images from our next mandate, and see the main reason why we switched over to Sony!  We're eager to see what the competition will come out with, to try and match this full-frame small-sized beast!
Posted by SNAPePHOTO